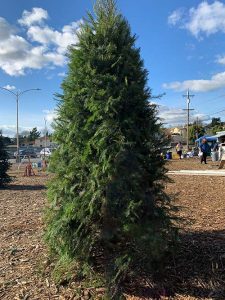 Last week my daughter called to say she was driving up 63 miles with her two-year-old son to buy a Christmas tree at a lot less than 2 miles from our house; a lot where her family had purchased trees many times when they had lived in the area.

She had called the lot and they said they had “a few trees left.” When we pulled into the parking area “a few” meant 3 and they were probably the largest 3 in their inventory, each clearly well over 10 and a half feet.

My reaction was immediate, “Let’s go down to Home Depot. Their prices are reasonable and I’m sure they have a much larger selection. It’s only about 20 minutes away.”

But my daughter was already out of the car and although she loves to haggle and bargain, it was clear from the enthusiastic responses of the site’s owners that no haggling was needed. Within 30 seconds my daughter returned to the car, “These are the last three. They’ll let me have one for half price and cut it down to 8 feet.”

Within 10 minutes, the tree was fresh-cut, trimmed and tied securely to the roof of her vehicle.

And so yet another valuable lesson learned: don’t assume, get all the information and, at the very least, get out of the car!